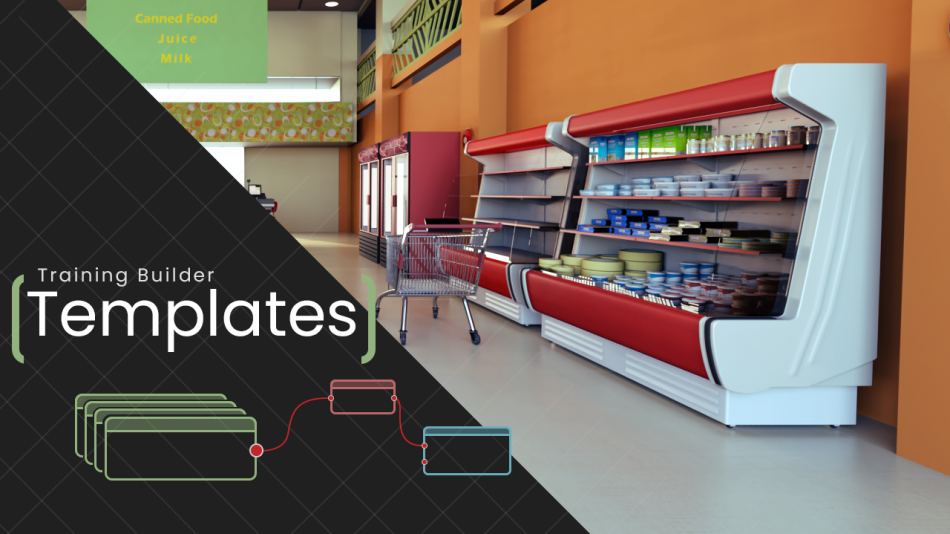 Creating a simple interaction in the Training Builder requires the use of a Scene Node, an Event and a Response. The Scene node defines which object in the scene is the actor in the event system, but in some cases you might have a large number of objects, which requires you to create a separate event system for each one, and that is by all means inconvenient.

An easy way to solve this problem is to use the Template Node in SimLab Composer, instead of the regular scene node.

Template Nodes use a query system to define a single or multiple objects from the scene, which then can be attached to Event and Response nodes similar to the regular Scene Node.

To create a Template Node, click this icon in the Training Builder.
Once clicked, a new diagram tab will be created with a single template node inside it.

Once the template node is created, you can click on the edit button to open the query dialogue.

There are 3 ways to define objects through the query :

Within the query, you can use AND / OR functions to refine the query and pinpoint objects in the scene.

As we have mentioned eariler, a method of searching for objects beside their names, is the use of Attributes. Object Attributes (BIM) are meta data that designers use to technichally document their designs. Its is an essential element in communicating components design and in manufacuring these components.

The ability to pick objects by their attributes is very useful and can be done using the Attributes Manager or the Template Node Query. In some cases where objects names are not helpful, attributes can identify specific objects without much effort.

This is a simple event system that utilizes the Template node. In this example whenever an object with the attribute “Product” is let go (Grab ended) the object will have its rotation reset and will fall to the surface underneath it.

Watch this Tutorial to learn more about the use of Templates in the Training Builder of SimLab Composer.