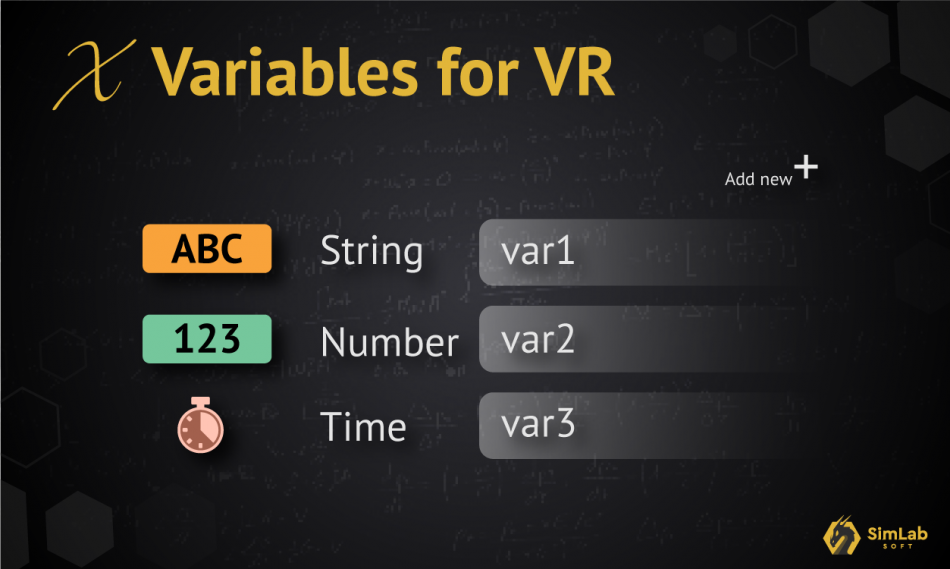 Using the visual training builder, user can add variables of the following types:
String Variable: Stores object names, message data, ..etc
Number Variable: Supports both integer and float numbers, can be used for counting, and storing/calculating values
Time Variable: can save the time at any stage of the VR experience

Initial value can be set to any string in the variable editor in training builder.
When used in Change Variable response, string should be surrounded in single quotations ( ‘ )

Initial Value can be set to any float or integer numbers
The following operations are supported for number variables
Increment: Adds one to the current value
Decrement: Subtracts one from the current value
Time Difference: calculates the different in seconds (up millisecond precision) between two time variables
Expression: large number of expressions are supported we will discuss those in a new article to be published soon.

Variable writer is available under the VR effect menu.

The user can control its size, and place. So it to be aligned on a wall in the scene or on a monitor

User selects which variable to view, color of the text, and prefix text.

Having multiple variable writers belonging to the same group makes them have the same font size.